Mark McCormick
← Back to blogPublishing

For reps who might have only sold traditional print advertising or even newsletter advertising, programmatic ad sales can seem daunting.

There is a lot to learn and the first step is understanding the language of programmatic ad sales.

Before we dive deep into the terminology — and, in our Part II, the concepts — it’s important to understand the basic differences between advertising as we traditionally know it and the world of programmatic advertising.

Traditional advertising, as publishers know it, goes like this: You, the publisher, have quality space to sell. Through already established relationships as well as proactive efforts from both eager advertisers looking to buy as well as your team looking to eagerly sell, those spaces get filled for pre-defined, agreed-upon prices and your audience sees a completed package exactly as you’ve designed it.

Programmatic advertising, at its most basic, provides a variety of ways to automate the proactive efforts mentioned above. With that automation, opportunities abound to provide advertisers, publishers, and audiences only those quality ads that make sense. And with that quality comes ample opportunity for all to profit.

With that inspiration, we present a glossary of programmatic ads terminology to help your ad sales reps get familiar with the terms and concepts that they will have to understand to sell programmatic ads.

Technological marketplace in which publishers and advertisers participate in real-time auctions (via their SSPs and DSPs, respectively)

Those on the buy-side with products or services they’re looking to advertise. Advertisers buy ad inventory from publishers using DSP.

Media buyers who purchase inventory through DSPs on the behalf of others, often adding requisite data in order to reach “specific campaign KPIs”

Connects platforms for easier communication. Through the Google Ads API, for instance, developers can access the Google Ads server to carry out programmatic tasks and even create applications.

The division into markets or demographics based on various criteria

DSP’s answer in a bidding scenario, usually with a price and creative specs

SSP’s signal that there’s an impression for sale, usually with impression details

Software that stores and manages information for buyers and sellers

Type of auction in which a publisher makes inventory available simultaneously (rather than in waterfall method) to multiple demand sources, via a tag in the page header

Form of programmatic advertising, like RTB with invite-only exclusivity and security, in which publishers give inventory a deal ID and invite specific advertisers to bid 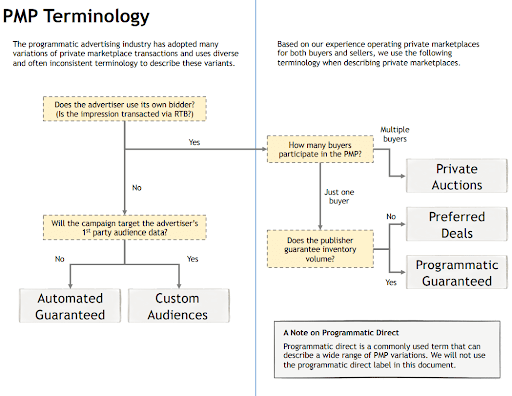 An oft-misused term that essentially covers a range of programmatic forms that, according to Digiday, “take the automation mechanisms that were popularized by RTB and apply them to the typical ad buying process”

Those on the sell-side with ad space to fill. Publishers sell ad inventory to advertisers using an SSP.

Auction triggered by a user landing on a page. Data is offered on a SSP — the bid request — and the highest price amongst multiple DSP bidders — the bid response — wins, serving the ad on the page almost instantly.

Software used by publishers to sell advertising inventory. Receives bids from DSP and automates the sale. Easily integrable to allow a minimum bid (or price floor).

Type of PMP in which a publisher sets a fixed price on inventory via SSP, then a DSP (evaluating its own first- and third-party data against that inventory) chooses to buy or pass